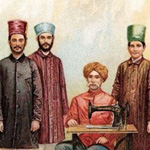 Published: 1892 (Below: Text from the back of these two picture cards) An extensive empire of the British Crown, consisting of the Great South Peninsula of Southern Asia and a narrow strip along the East side of the Bay of Bengal. It is bounded north by the Himalaya Mountains, West by a mountain range, East by parallel offshoots from the opposite extremity of the Himalayas, … END_OF_DOCUMENT_TOKEN_TO_BE_REPLACED